Gimme All Your Bluffin’

During my junior and senior years at college, there was a group of us who kind of always ate lunch together.

Well, actually it was this guy I really adored and would do anything to be around *COUGH* stalker *COUGH COUGH*, his two roommates, and a fluctuating assortment of the guys from their residence group — which is like a fraternity in that it’s a group of guys living together, but decidedly unlike a fraternity for its lack of hazing and brotherly humiliation.

So, back to our lunch group — I was usually the only girl there, which was fine with me. I didn’t care for the giggly-sorority-type which made up the majority of the female student population. I found the male students to be 85% less catty, and therefore, 100% more interesting. Occasionally, one of them would bring along whatever vacuous blonde he was dating at the time, but it was a rare thing. Fine with me – I had been comfortable being “one of the guys” since high school.

Music was one of the most common topics of discussion over our meals. Videos were The New Thing. MTV had launched just the month before my class began our Freshman year. While we did want our MTV, there was no cable TV at Grove City College. What there was  were televisions with antennas in some of the dorm lobbies. Beginning in 1983, very late on Friday nights, groups of people would commandeer these TVs to watch Friday Night Videos — network TV’s answer to MTV — on static-plagued screens. Watching popular music instead of merely listening to it was quite the phenomenon.

And now to the bit all this has been leading up to — I may mentally meander a bit, but I get there eventually:

One day at lunch, the object of my adoration excitedly told us about an unprecedented Christmas album coming out by a band most of us liked. They were going to take some of their songs and put Christmasy-type lyrics to them. Then he started singing one of them:

“Red Suit,
Fur hat,
and I don’t care because
my belly’s fat”

then a line from the chorus,

“Coz every girl’s
crazy ’bout a
San-ta Claus”

The group? ZZ Top, of course, to the tune “Sharp-Dressed Man”

Well, I thought this was just the Best Thing Ever, because I just loved ZZ Top at that time. The next day at lunch, there was someone at the table who hadn’t been there the day before, so I started telling him about this new ZZ Top album.

Then everyone else started laughing. Apparently they’d all known he’d made up the entire thing. I was the only one who didn’t realize it. Gullible is not my middle name, but it must be a footnote on my birth certificate. 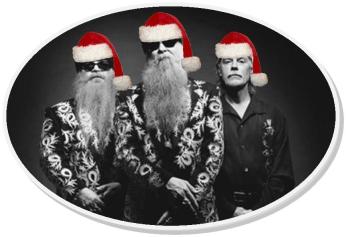 Well, you’ll be pleased to know I got my revenge.

Yes, it took me a few years, but eventually…..I married the jokester. Ha, that’ll learn ya.

In 27 years of marriage, I’ve once in a while managed to pull the wool over his eyes and fool him with some made-up nonsense, but not very often. He also still gets me once in a while. But, so that I don’t look like an idiot in front of others, he is kind enough to make sure I realize when he’s telling a tale. If I don’t figure it out on my own, he’ll quietly start singing, “Red suit, fur hat….”

Then we share a secret smile, and I love him all the more.

Got something to say? Cancel reply